GOP Convention Embraces Anger And Fear, Despite Being Billed As 'Optimistic'

“People of faith are under attack.”

Those were all comments from speakers on Monday, the opening night of the Republican National Convention, which GOP aides had promised would be “very optimistic and upbeat.”

The tone was certainly not that. It seems President Donald Trump had not yet made America great, because speaker after speaker had plenty of grievances with the state of things. And all of these problems, they warned, would get exponentially worse if former Vice President Joe Biden defeats Trump in November.

“President Trump is fighting against the forces of socialism, communism and totalitarianism. And he will continue to do just that,” said Maximo Alvarez, a Florida businessman whose family fled Cuba. “And what about his opponent and the rest of the D.C. swamp? I have no doubt they will hand the country over to those dangerous forces.”

“Their vision for America is socialism,” Haley said. “And we know that socialism has failed everywhere.”

The first night of the Republican National Convention underscored that the GOP is running once again on a strategy of fear rather than hope. 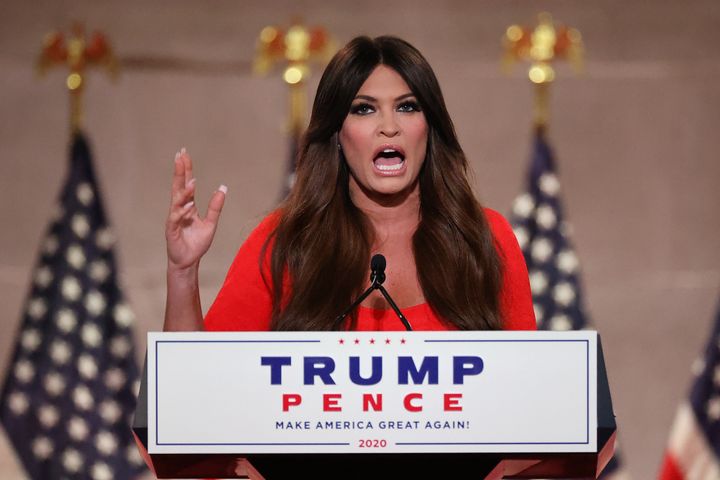 Kimberly Guilfoyle, the former Fox News personality and girlfriend of Donald Trump Jr., gave one of the darkest and most intense speeches of the night, shouting as if talking to a packed convention center instead of the largely empty room she was in.

She decried “the socialist Biden/Harris future for our country,” and said Democrats have turned California into “a land of discarded heroin needles in parks, riots in streets and blackouts in homes.” (Guilfoyle did not mention that she was once first lady of San Francisco and married to Gavin Newsom, who is now California’s Democratic governor.)

A central campaign theme for Trump is crime, playing on racist fears of people from low-income neighborhoods taking over the suburbs.

Mark and Patty McCloskey were supposed to be the embodiment of what could happen if Biden wins.

“We’re speaking to you tonight from St. Louis, Missouri, where just weeks ago you may have seen us defending our home as a mob of protesters descended on our neighborhood,” Mark said.

“What you saw happen to us could just as easily happen to any of you who are watching from quiet neighborhoods around our country,” Patty added. “And that’s what we want to speak to you about tonight.”

In June, the McCloskeys, both lawyers, gained national attention for pointing guns at Black Lives Matter protesters who marched by their mansion in St. Louis. The couple now face felony charges of unlawful use of a weapon. No shots were fired.

Democratic St. Louis Circuit Attorney Kim Gardner has described the protesters as “peaceful” and “unarmed.” The McCloskeys claim the demonstrators ignored “No Trespassing” and “Private Street” signs before breaking through a gate to get into the community.

“They are not satisfied with spreading the chaos and violence into our communities. They want to abolish the suburbs altogether by ending single-family home zoning,” Patty said in her speech Monday. “These are the policies that are coming to a neighborhood near you. So make no mistake: No matter where you live, your family will not be safe in the radical Democrats’ America.”

One of the few exceptions to the angry tone was South Carolina’s Tim Scott, the country’s lone Black Republican senator. Scott gave the final speech of Monday night, using his own biography ― how he struggled economically and academically as a child, and his path to the Senate ― to argue that the Republican Party offers the best opportunity for growth and hope.

“Our family went from cotton to Congress in one lifetime. And that’s why I believe the next American century can be better than the last,” he said. “There are millions of families like mine across this nation, full of potential, seeking to live the American dream. And I’m here tonight to tell you that supporting the Republican ticket gives you the best chance of making that dream a reality.”

A key topic on which the convention was relentlessly upbeat was the coronavirus. It didn’t focus on the people who have lost loved ones, how the United States leads the world in coronavirus cases ― or how the president insisted for months that the virus was a “hoax” that would just go away on its own.

Instead, the speakers and the videos produced for Monday’s event spun Trump as someone who showed “quick action and leadership.” The claims were so egregious that MSNBC cut away and went to its Dr. Vin Gupta, a pulmonologist at the University of Washington, who rejected the gaslighting.

“So to say that 170,000 souls lost in our country up to now is success, by any measure, is fantasy,” he added. “It’s disrespectful to the families who have lost loved ones, to front-line clinicians who put their lives at risk. It’s fantasy. It’s propaganda.”