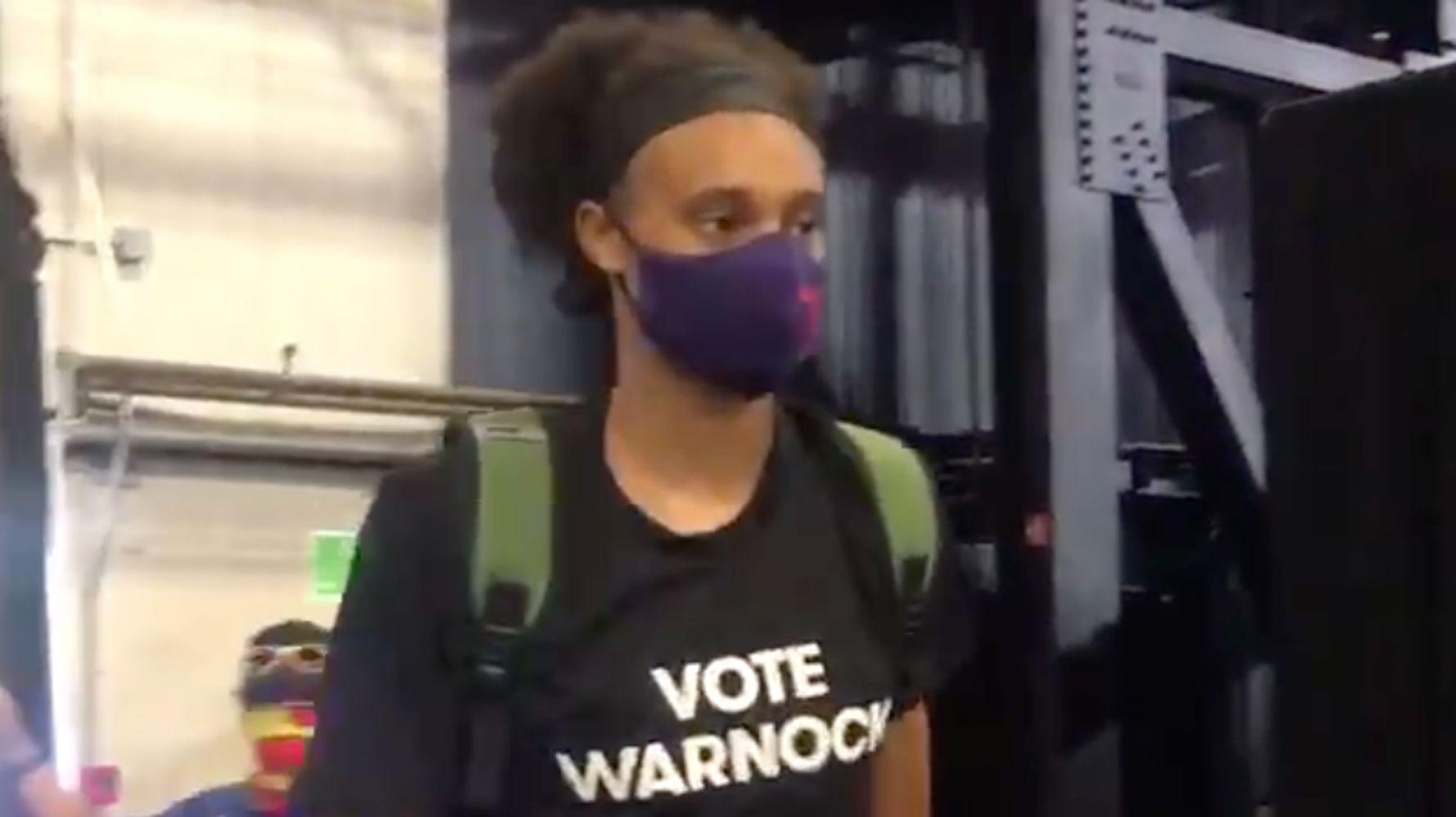 WNBA players want Atlanta Dream co-owner Sen. Kelly Loeffler (R-Ga.) out of their league ― and out of the Senate.

Players are wearing “Vote Warnock” T-shirts to games this week to support the Rev. Raphael Warnock, a Democrat who is challenging the Georgia Republican for her Senate seat in November.

Current and former players have called for Loeffler’s ouster from the WNBA following a string of controversial actions since she was appointed to her Senate seat last December. A supporter of President Donald Trump and former Wall Street executive, Loeffler’s views are at odds with many of the values espoused by the progressive basketball league.

Last month, calls for Loeffler to sell her stake intensified after she voiced her opposition to Black Lives Matter in a letter to WNBA Commissioner Cathy Engelbert and called on the league to abandon its support of the anti-racism movement. She claimed it “sends a message of exclusion” for a sport to subscribe to a political agenda and expressed concerns it would drive fans away.

Engelbert has said that there are no plans to force Loeffler to sell her share of the team. She also reaffirmed that this season will be dedicated to advocating for social justice issues.

Elizabeth Williams, a forward on the Atlanta Dream, told ESPN that the “Vote Warnock” shirt idea was proposed as a response to Loeffler’s statements in an effort to effect change at a policy level.

“If we’re going to sit here and talk about wanting justice reform, part of that is making sure that we have officials in office that understand that,” she told the sports network.

She said the Dream and other WNBA players were making a coordinated effort not to address Loeffler in recent weeks. Instead, they are putting their focus on supporting a candidate that better represents their views.

“We wanted to make sure we could still keep the focus on our social justice movement, and, funny enough, Rev. Warnock is somebody who supports everything that we support and just happens to be running in that seat,” Williams said. “So it just worked out really well.”

We are @wnba players, but like the late, great John Lewis said, we are also ordinary people with extraordinary vision. @ReverendWarnock has spent his life fighting for the people and we need him in Washington. Join the movement for a better Georgia at https://t.co/hC8iF9urak pic.twitter.com/mvN5e9m4oO

Warnock is the senior pastor at Ebenezer Baptist Church, the historic Atlanta church where the Rev. Martin Luther King Jr. preached. He’s staked out his major issues as health care and voting rights.

New York Liberty player Layshia Clarendon, a former Dream player and vocal critic of Loeffler, tweeted that Warnock is a “senate candidate with our leagues values.”

“Warnock is for criminal justice reform, LGBT+ rights and reproductive rights,” she told ESPN. “Those are the kind of people we want representing us.”

On Tuesday, as WNBA players in teams including the Chicago Sky, Atlanta Dream and Phoenix Mercury donned “Vote Warnock” and “Black Lives Matter” shirts before their games, Warnock said he was humbled by their support.

“This movement gives us the opportunity to fight for what we believe in, and I stand by all athletes promoting social justice on and off the court,” Warnock tweeted

I am honored and humbled by the overwhelming support from the @WNBA players. This movement gives us the opportunity to fight for what we believe in, and I stand by all athletes promoting social justice on and off the court. #BlackLivesMatter

A statement from Loeffler’s office provided to HuffPost said: “This is just more proof that the out of control cancel culture wants to shut out anyone who disagrees with them. It’s clear that the league is more concerned with playing politics than basketball.”

The statement said that Loeffler stood by her previous comments. Specifically:

“We come together around sports, but promoting a political agenda divides us rather than unites us. The lives of every African American matter, and there’s no place for racism in our country. But I oppose the BLM political organization due to its radical ideas and Marxist foundations, which include defunding the police and eroding the nuclear family. On the other hand, our flag represents our values of freedom and equality for all. If we can’t unite behind our flag, much less the national anthem during this struggle, then what keeps us together?”

The Black Lives Matter website calls for defunding the police by reducing funding to police departments and investing that money in community services, such as education, health care and housing. It also calls for a disruption of the “Western-prescribed nuclear family structure” and to replace it with a collective care and support system.

The WNBA announced last month that players this season will wear warmup jerseys that read “Black Lives Matter” and “Say Her Name,” a reference to Black women and girls who have been killed at the hands of police and in episodes of racial violence.

The uniforms are part of a larger effort by the league to address inequality and systemic racism in America via their new Social Justice Council, which will promote conversations around those and other issues, including voting rights, LGBTQ advocacy and gun control.

This article has been updated with a statement from Loeffler’s office.