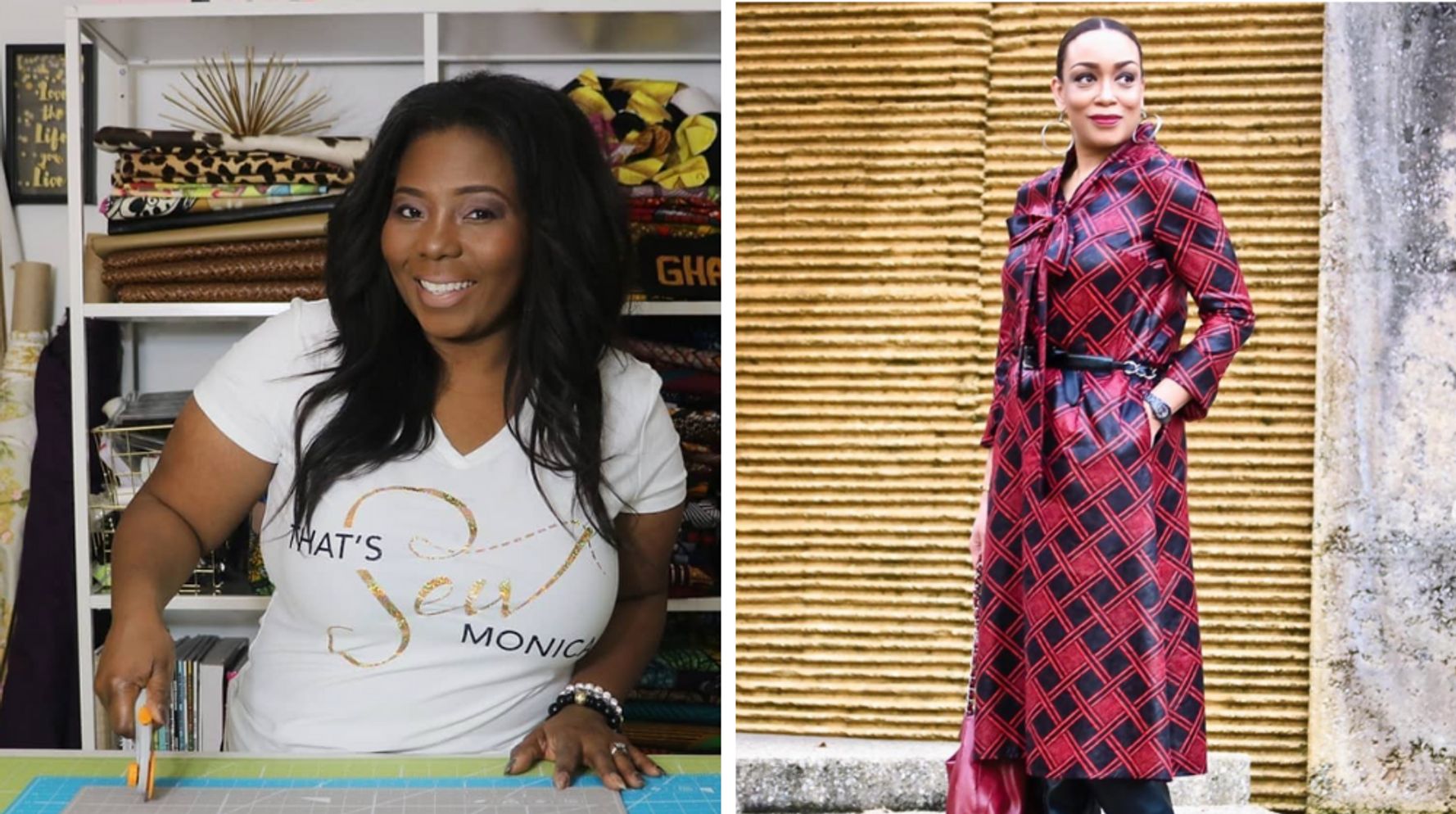 The Black Lives Matter movement, which surged to the forefront of America’s consciousness following the death of George Floyd, may well be the largest in the country’s history. According to data collected by Civis Analytics, 54% of those surveyed participated in one or more forms of activism for the first time during June 2020.

In response to the protests, brands in all kinds of industries began issuing messages of solidarity for the movement ― some successful, others not. Marketing, in print and in social media influencer culture, has lacked diversity for a long time, even though over 50% of millennials and Gen Z surveyed by YPulse say representation in advertising is important to them.

The crafting, DIY and sewing communities are not exempt from this lack of diversity and representation. Knitwear designer Jeanette Sloan has been involved in raising racial issues in the world of fiber crafts for years. She is the founder of BIPOC in Fiber, a website that lists and promotes Black, Indigenous and other people of color working in the fiber industry. And many big brands, such as Bernina, Dritz, Hobby Lobby, Joanne Fabrics and Brother, were noticeably silent on #blackouttuesday. Instagram influencer Pink Mimosa by Jacinta called the brands out and started the Crafter’s BIPOC and Ally Vendor List in response.

We talked to five Black sewers, crafters, and influencers in the DIY community. Not surprisingly, they all had stories about encountering prejudice from large sewing and crafting retailers. They also spoke about the lack of diversity and representation within the sewing and DIY communities.

Michelle Morris launched her sewing blog, That Black Chic, about 10 years ago. Morris was always an extremely visual person and, when Instagram became popular, she began posting photos of what she made there. The woman wearing her creations in all her Instagram posts is her daughter, Mori. “She’s my muse,” Morris, who rarely sews for herself, told HuffPost.

Morris never spent a lot of time reading sewing magazines. She’d only purchase one if it had an interesting cover. In early 2016, she started paying more attention to what was actually in the “mainstream” sewing publications.

“There wasn’t one expert, one picture, one anything, of anyone who looked like me,” she said. So she bought more magazines. And still nothing. “It really blew my mind. I mean, we’re here. We’re out here. There are many of us, if you just look.”

Morris decided she would publish her own magazine, Sewn Magazine, in 2017 and would feature makers and experts that looked like her and other underrepresented groups in the sewing and DIY communities. “I don’t make much money at all from it,” Morris said. “But since I launched it, suddenly all the other magazines are coming to me wanting to feature me.”

Morris has said yes to some of the offers. She’s cautiously hopeful that some brands and companies are taking steps toward being more inclusive. Currently, she’s an ambassador for Husqvarna/Viking sewing machines, which along with Singer and Pfaff brand machines, is part of SVP Worldwide. All of the DIY makers we spoke to mentioned SVP as a company that’s making significant changes with some success.

“We’ve always had diversity in our campaigns, particularly in our Singer brand,” said Dean Brindle, SVP Worldwide’s CMO. “After some evaluations last year, we wanted to expand our reach because our sewing community is actually more diverse than the general population.”

Monica Tetteh of That’s Sew Monica comes from a long line of sewers. Originally from the Bronx, New York, with roots in Ghana, Tetteh started sewing to honor her mother’s legacy 10 years after her passing.

She hosts two monthly sew-alongs; one called @sewyourview on Instagram and the other an in-person (currently conducted via Zoom), all-day event called @theprojectsew.

Before the pandemic, The Project Sew met in a Dallas city building, and anyone was welcome to attend the events.

“Honestly, people of all skill levels, genders, backgrounds … everyone is welcome,” Tetteh said. “I remember one meeting when an older white woman showed up carrying her machine. She walked in the door and we did what we always did: we all stood up and said, ‘Welcome to Project Sew!’ The woman looked around then responded, ‘I think I’m in the wrong place,’ and turned and walked out.”

Tetteh followed her out to the reception desk and heard the woman ask where the sewing group was. The receptionist informed her that she was in the right place, and that Monica (who happened to be standing behind her) ran the group.

“I realized then,” Tetteh said, “that what had put her off was that the majority of the sewers in the group were Black. I mean, we were all at our sewing machines when she walked in. We were obviously a sewing group but she thought she had to be in the wrong place because most of us were Black. We were the Black sewing group.” The woman stayed that day but never came back.

The fact that someone would think there was such a thing as a sewing group defined by race had never really occurred to Tetteh before, but she soon changed her way of thinking after this incident.

“For instance,” she said, “do you know how specific you have to be when searching for an image in Google for social media? I have to type, ‘sewing machine with Black hands.’ If not, I won’t get any images that show anything but white hands.”

Erica Bunker wanted to be a fashion designer since learning how to sew in eighth grade home economics class. “Go to school and get a real degree,” people told her. She sewed home decor items and made costumes for her kids while working as an accountant, but in 2005, after 13 years of working in an office, she started her sewing blog, Erica Bunker, DIY Style.

Bunker’s biggest passion is passing on sewing skills to people of all experience levels. She uses patterns from popular brands to create her looks, but what she’s really known for is her styling ― some of the other makers we spoke to mentioned her as one of their inspirations.

Bunker is currently an ambassador for Babylock sewing machines, but said she’d probably switch when her contract is done. Like all the makers we talked to, she mentioned Singer, Viking and Pfaff machines (as well as Janome America) as brands trying to do better with diversity and representation.

“You know, I’ve walked into sewing machine stores to ask about a machine and been told, ‘Oh that machine is really expensive,’ more than once,” she said. Bunker, one of the people behind the Instagram account Black Makers Matter , is committed to showcasing and connecting with Black makers.

As Bunker (and all the women interviewed expressed), there has never been a shortage of Black makers in the sewing and DIY communities. There has been a distinct lack of representation from organizations and brands.

Faith St. Jules, a creator and DIY fashion blogger, uses sewing to “keep herself sane in these crazy times.” Through her YouTube channel, St. Jules also hosts what she calls “Motivation Mondays,” where she talks about mental health topics and ways to stay motivated during trying times.

St. Jules learned to sew at a young age. After returning from service with the U.S. Army in Iraq in 2012, she turned to sewing as a way to help deal with her PTSD.

St. Jules remembers walking into a big sewing machine store and being ignored. “I decided I’d give them another try,” she said. She went again and the same thing happened. After insisting that someone help and asking about testing a machine, the sales associate told her, “We don’t do that here,” even though she could see a white woman obviously testing a machine. St. Jules is hopeful though, and thinks some change is happening on social media.

“Sewing is art and, for me, an escape from mental illness. I hope I inspire others,” St. Jules said. “If I can help just one person from something I post, inspire someone else, that’s all I need.”

Ebony Love, a quilter, business coach and owner of Love Bug Studios, where she sells quilt patterns, kits and notions, as well as offering online classes, has been sewing “since her feet could reach the pedals.” Love started out making dresses, but when all her friends began having babies, she turned to quilting. Soon people urged her to sell the quilts.

Over the years, Love’s business shifted to online quilting instruction and business coaching. She is or has been a member of many crafts organizations.

She’s also left a lot of organizations over the years because of underlying racism. “Nothing overt,” she said. “You know, it’s the little things, things happen and you think to yourself, ‘Did that really happen?’ ‘Am I overreacting?’ and then you realize that they keep happening.”

Love says there’s a big reckoning happening right now in the crafts and sewing spaces. Recently, after being a member for years, Love left the Crafts Industry Alliance. The deciding factor was an incident wherein she was reprimanded by the organization’s owner and told her “tone” was offensive. She’d written a comment explaining copyright laws to another member that apparently was “too harsh.” (The Crafts Industry Alliance founder has since posted an apology for the incident.)

“But a lot led up to that,” Love said. “For instance, the owner of Crafts Industry Alliance was calling out all these other businesses about not making a Black Lives Matter statement when she, herself hadn’t made one. So I called her out.”

“People think of sewing as their safe space and they don’t want to mix in race or politics, but the thing is, the sewing community is a reflection of the world at large and racism and prejudice are not things you can ignore,” Love said.

All of these women are encouraged by some of the responses they’ve seen to the Black Lives Matter and Black Makers Matter movements and the increase in diversity and representation on social media. They’re all a little cautious though, too.

As Tetteh said, “It’s easy to put some pictures up on social media. But only time will really tell.”